After a bumpy taxi ride, we arrived at the village of Telli where my guide Chicago and I spent my first night in Dogon country. He had family in the area, although the local guides treated him like a foreigner. I met three French, one Belgian, one English, and one Dutch travelers at the small hotel there. I climbed a traditional wooden Dogon ladder to sleep on the terrace (roof) of one of the banco buildings. The breeze was a refreshing respite from the heat of the day and, because only other foreigners were there, we could remove our clothes to climb into our sleeping bags.

I spent much of the night fantasizing about Damien, the cute French guy sleeping next to me (the second French guy named Damien I’ve found attractive on this trip!). I was also attracted to the Belgian guy Tim. They were traveling with two French women, Melanie and Severine. We woke to a breakfast of bread and coffee or tea. The French and the Belgian continued on their way out from Dogon country, while David and Annemarie, the English and Dutch partnership, headed the same direction as Chicago and I. The first day included a visit to the ancient Tellem and old Dogon dwellings up on the falaise, the mountainous cliffs.

We then hiked around 4km during the morning to another village and then another hike of about 7km to the village of Ennde where we spent the next night.

Much of the focus of the Dogon villages is the granaries, with separate ones for the women and the men. There are also cemeteries, ceremonial places with storage for masks, breweries, and dwellings. Dogon symbology of the sacred crocodile and the sacred tortoise are common. Dogon craftspeople carve wooden statues and doors and blacksmiths have high status still in their villages. Each village usually has a village chief and formerly had a hogon or spiritual leader. There is also usually one hunter, tasked with chasing game such as monkeys, serpents, and other animals.

I suffered a bit due to the lack of good vegetarian food, mostly eating only couscous, rice, or noodles with sparse vegetables to accompany them, plus drinking Fanta, Sprite, or a fizzy pineapple drink and lots of bottled mineral water, sometimes supplemented with the sport mix I brought along to prevent dehydration. I lost a bit of weight and didn’t feel strong enough to hike up the more strenuous route on the way to the village of Begnetmoto, so Chicago led me up an easier valley route to the village.

He and/or the other guide tried to keep me from hanging out with David and Annemarie but I was lonely for English chatter and we had some really good conversations. Their guide even ended up telling us a strange story about three sons of an early human ancestor, Arab, black, and Toubab (or white, including Chinese and perhaps also Indian?). In the story, the father dies and the mother is worried about who will continue the family. She asks each of her sons, but the Arab son is not friendly with his brothers. She says the black son is doomed to endless toil and the Toubab son seems to get off easy. After thinking about it all night, I discussed the story with the guide again the next morning and told him I didn’t like the story or its implications. It reminded me a bit of the story of the lost Israeli tribe of Ham. He and I agreed that black Africans shouldn’t subordinate themselves to other people and that European and American colonial policies had to end and Africans have to take control of the resources of their own countries.

After the 2km hike out of Dogon country, we met the same taxi that had dropped us off a few days before in another location. He played some music by Tikken Jah Fakoly (pronounced “Chicken”), a Malian reggae performer, that made me cry, a song called “Ils ont partagé le monde” (“They have divided up the world”) about how the U.S. and Britain have taken and divided up the spoils of everything in the world.

After some worries on my part about whether Chicago was going to press me for more cash, I was glad that he didn’t seem worried about it and I even gave him a bit of a tip once we arrived in Sevaré. He helped me check in to the hotel there, then went on his way to Timbuktu, where we will perhaps meet again later on.

The Motel de Sevaré was basic, but felt like heaven with hot water showers! I left early the next morning, November 27, on the bus to Bamako. 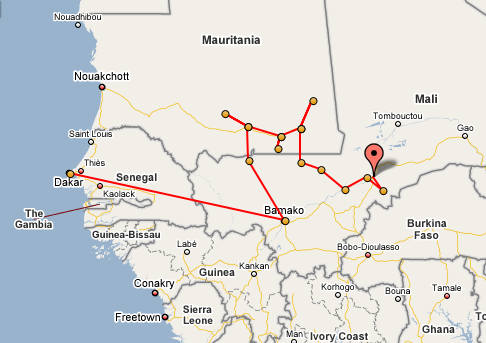 I finished reading Charleen Touchette’s It Stops With Me: Memoir of a Canuck Girl this morning. I put it on library reserve because I read that some school district had banned it and that always sparks my curiosity about a book. The book is autobiographical and tackles the issue of parental abuse of children and therapeutic recovery from all kinds of abuse. I warmed up more and more to the book as I read it.

I’m at home with a cold today.

Yesterday, I had lunch with my friend Jim S. at Cafe Luna on Castro St., then we went to Cafe Flore to chat a bit more. After that, Kurt S. and I did our regular massage exchange at my place. I’m so glad I have my wonderful purple massage table. I decided not to go out to the Eagle or El Rio this weekend, just to spend some time relaxing at home reading about Egypt. A funny coincidence is that my nephew Alex is also learning a lot about Egypt right now since he’s going to a summer camp on that topic. I’m looking forward to seeing him and the rest of the Seattle-based family soon on my trip there from July 20-30, when I will also take several days to go camping to see the wildflowers on Mount Rainier with some of the radical faeries.

The faerie gathering I attended at the Breitenbush Hot Springs Community in the Cascade foothills of rural Oregon was fabulous! I feel so relaxed.

Dean (Fister) was kind enough to pick me up from the airport and give me a place to stay the night before heading to the gathering. He introduced me to his friend Bam Bam. We went out for a couple of drinks at the queer bars on Stark Street, one of the two gay districts in Portland, Oregon. I saw some really goodlooking young longhair guys, some of whom were probably hustlers and none of whom seemed interested in me. So I hung out with Bam Bam until Dean joined us later in the evening. I did meet one nice fellow named Dustin. We played 20 Questions to see if we could figure out what each of us does for a living. I finally figured out that he is a diver. He figured out that I’m an Internet activist.

The next morning, Jim and Lars arrived at Dean’s place and we went to buy some boots at a butch camping store called G.I. Joe’s. I got some great pics of those guys in front of the store, then in the rifle section. Jim and I both bought the same size of women’s boots, called Bog Boots, perfect for Breitenbush weather. Then, we drove over to Three Friends, a fabulous cafe where the faeries meet on weekends. Lars and I played a very close game of pool while waiting for our food. We were famished and ate quickly. Then, we stopped at the car rental office to get me signed up as a driver.

We drove in a few hours to Breitenbush. Damien and another faerie greeted us at the parking lot and a lovely camouflaged nun pointed us to our parking spot.

I unpacked my stuff into geothermally heated cabin D8 which I shared with Viking Diva, Elephant’s Child, and another faerie whose name I can’t remember. My faerie name is Stardust.

The gathering was perhaps the mellowest one I have ever attended. I really relaxed, avoiding doing any of the organizational stuff since I got so sick last winter as co-Queen Registrar with Rosemary for Remembrance from trying to take care of everything about the gathering.

I just ate excellent vegetarian food, did yoga, exchanged massage, soaked in the tubs, went into the sauna, danced the Dances of Universal Peace (“sufi dancing”), attended Scotty Dog’s workshop on faerie intentional communities, and made love with a couple of really sweet faeries named Jacob (Cob) and Rodney.

The fashion show and the talent/no-talent shows were wonderfully entertaining and not as long as at most gatherings.

I met and connected with so many wonderful people that it would be impossible to list them all here.

I hitched a ride back to Portland with Rodney and his roommate James. We went to a re-entry potluck event at Walowa’s place. I ended up spending a wonderful night with Rodney at a Portland hotel.