While celebrating the gains of queer people, such as the recent U.S. Supreme Court ruling on same-sex marriages, I feel it’s important to remember that you can still be arrested for your sexual orientation in 75 countries and punished by death in 10 countries around the world.

I left Lagos the day before yesterday. I was supposed to go on a flight to Bamako on Cameroon Air, but it got hijacked to Ouagadougou by some Cameroon national sports team. So, instead I took a flight to Abidjan, spent another night in the transit hotel at the airport. 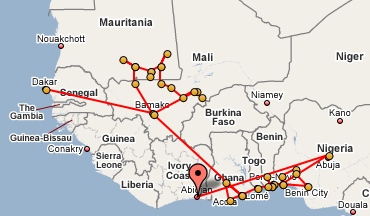 Then I begged for the promotional rate on an Air Senegal flight to Bamako this evening. 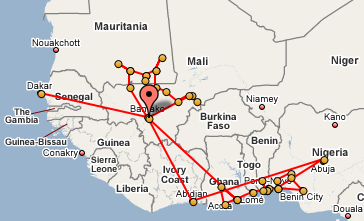 Now, I’m back in Bamako, mosquito territory. Luckily I’ve still been popping the malarone. This time, I snapped some pictures of the beautiful Hotel Djenne.

I managed to dine on another delicious vegetarian meal at the amazing Restaurant San Toro accompanied by an almost hypnotic kora duet.

Tomorrow morning, I will scout a way to Timbuktu for the Festival in the Desert.

The guy arrived after I waited three hours for him (see January 2 entry). He looked at my passport and told me the DRC Chancery in Abuja usually only handles U.S. Citizens who have a multiple-entry instead of a single-entry visa to Nigeria. I explained that I couldn’t return to Nigeria, so didn’t need a multiple-entry visa, that I would enter Congo from another country entirely. He told me to wait while he supposedly called someone who apparently told him it would take a week to obtain the visa. So, rather than showing my anger, I just thanked him and said it was too bad I probably wouldn’t be able to do my research in the DRC. Then, I left. They had told me it would be easy to find a taxi, but I didn’t see any. I tried calling Folly – who I had already paid 300 Naira for taxi’ing me around and waiting a couple of hours at the Chancery before sending him away – but he didn’t pick up, so I went to the end of the street and luckily found a car to bring me back to the hotel.

Over the course of the rest of the day yesterday, my anger gradually faded into a fairly deep depression. I realized that unless I got my visa for the Niger the next day, that is today, I wouldn’t be able to travel through Niger to Gao and Timbuktu in Mali in time for the Festival of the Desert. I would have to try going by plane to Bamako and, if there is still time, to go to Timbuktu, although probably not to Gao. Another possibility is just to go to Bamako to take the flight from there, or perhaps from Accra, giving me time to try again for a visa to the DRC.