The guy arrived after I waited three hours for him (see January 2 entry). He looked at my passport and told me the DRC Chancery in Abuja usually only handles U.S. Citizens who have a multiple-entry instead of a single-entry visa to Nigeria. I explained that I couldn’t return to Nigeria, so didn’t need a multiple-entry visa, that I would enter Congo from another country entirely. He told me to wait while he supposedly called someone who apparently told him it would take a week to obtain the visa. So, rather than showing my anger, I just thanked him and said it was too bad I probably wouldn’t be able to do my research in the DRC. Then, I left. They had told me it would be easy to find a taxi, but I didn’t see any. I tried calling Folly – who I had already paid 300 Naira for taxi’ing me around and waiting a couple of hours at the Chancery before sending him away – but he didn’t pick up, so I went to the end of the street and luckily found a car to bring me back to the hotel.

Over the course of the rest of the day yesterday, my anger gradually faded into a fairly deep depression. I realized that unless I got my visa for the Niger the next day, that is today, I wouldn’t be able to travel through Niger to Gao and Timbuktu in Mali in time for the Festival of the Desert. I would have to try going by plane to Bamako and, if there is still time, to go to Timbuktu, although probably not to Gao. Another possibility is just to go to Bamako to take the flight from there, or perhaps from Accra, giving me time to try again for a visa to the DRC.

I’m hungry, thirsty, and hot waiting more than two hours for a guy to show up here at the Chancery for the DRC here in Abuja. A couple of days ago, I picked up the visa form which is now completely filled out, accompanied by copies of my travel itinerary, bank statement, and hotel reservation. This fellow really got on my nerves by telling me to wait here for him to arrive within the hour. I was paying a taxi driver by the hour to chauffeur me around town to the Niger Embassy, where I picked up my passport because they still haven’t given me a visa after give day’s wait, to the Internet Cafe, to print out the hotel reservation, actually to a second Internet Cafe because the first one had no power and a broken generator, and finally here to camp out at the Chancery while this guy finishes some mysterious unnamed business before, the guards assure me, coming here to help process my visa application. He had asked me to get a letter from the U.S. Embassy for the visa application, so I visited the Embassy on Friday and they told me it’s closed on the last Friday of the month, and of course everyone is closed over the weekend, then on New Year’s Day. Anyway, I think the guy is here now (see January 3 entry). 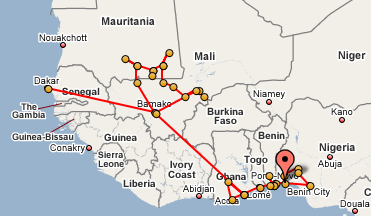 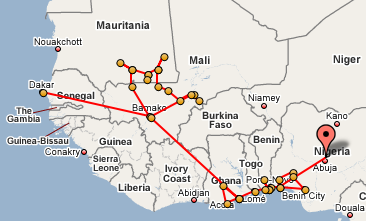 I’m in Abuja, Nigeria, trying to get an onward visa for Niger, plus a visa for Democratic Republic of Congo. This is a quite modern city designed along the lines of Washington, D.C. I’ll have to stay at least over the weekend, and possibly until the new year to get the visas.

Best of all, I managed to get the power adapter for my laptop in Lagos. I had a scare when I forgot the password I had used to lock the laptop. When using it everyday, it was easy to remember the password, but after a two-week break, I had no idea. Fortunately, the Dell guy who sold me the power adapter noticed that there was a password clue in Windows XP, and after thinking about my clue for quite awhile, I got a clue and remembered the password. So now, I’m catching up on a couple of weeks of computer updates and researching and writing a lot in my hotel room at the Q Palace Hotel here in Abuja.