It was a total drama getting the taxi driver to find the Millennium Guest House, located in a well-known cathedral compound, but perhaps it is a game the drivers play to try to get paid more. I am beginning to wonder, since it happened quite often.

I had to wake the security guy at the hotel to enter, since the flight had arrived quite late and my baggage search took awhile. But finally I succeeded in laying down my head to rest on the comfortable bed in the modest room furnished with a bible, a TV, and a glow-in-the-dark Jesus, as well as a much-appreciated air conditioner and a shared bath/shower. 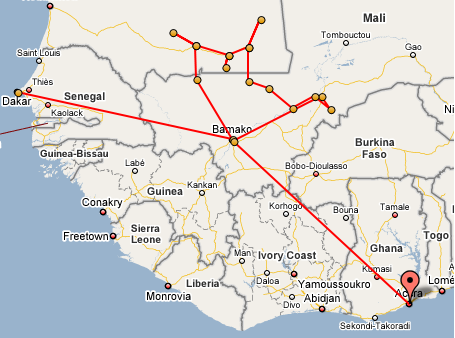 The next morning, I visited the National Museum, a short walk from the guesthouse. The woman taking tickets at the front entrance helped me buy a SIM card even though it was Sunday. I met a Czech guy working in Belgium who was on a trip related to encouraging and financing sport events on behalf of the European Union. Michal Krejza and I finished at the museum by trying to locate the linguists’ staffs.

The museum had excellent exhibits from a variety of west African countries, as well as a section on the slave trade, but I couldn’t find the linguist staffs mentioned in the guidebook. Turns out the staffs got entombed inside a wall when one other exhibit was updated, so it wasn’t possible to see them.

I found the 13th to 19th century figures from Komaland (pictured below) especially intriguing.

Michal and I walked past banks where I tried to withdraw cash using Visa cards at ATMs without success. We made it to the Kwame Nkrumah memorial and museum which was very interesting. Nkrumah, the first president of the first colonial African country to gain its independence, was a pan-Africanist and published some rather radical books. Perhaps that is why a military coup toppled his government and sent him into exile in Guinée. He married an Egyptian woman and both of their remains are now at the memorial.

Next we walked, then taxi’ed to the lighthouse near the Fort James shanty town. Michal bargained for us to enter at half the price the little girl who met us had demanded, then an adult man led us past the ancient generator and the rusting spiral staircase to where the light once shone and will apparently shine again if a planned renovation takes place. I was terrified by the rickety ladder to the top and the minimalist railing, although the view was impressive. I descended before the guy had a chance to also ask me for more money, although he couldn’t resist once we were getting back into our taxi.

I purchased a half dozen oranges for about 20 cents. We tried to eat lunch at a place closed on Sunday, as was the second place we tried, so finally we ended up at the Hotel Paloma Restaurant, where I tried palaver, a traditional dish of spinach and other vegetables and spices. It was delicious, even though I discovered a fish bone in it. We went our separate ways after a delightful discussion, including the topic of the white slave trade. I crashed at the hotel and left the next morning for the Nigerian High Commission office where I successfully applied for a visa after keeping a taxi on hir to go get photocopies. It wasn’t easy, but they accepted the application with a US$100 fee and I then left for a two-day trip to Cape Coast.