Yesterday morning, I took my leave of Oualata after a fine tour of the city and its painted houses, as well as a visit to the old Arabic manuscript library and museum of the ancient city. Although the conveniences and the transport are very basic in Oualata, the town is charming and tranquil. I’d put it on my return visit list for one day in the future.

Before a special meal of flour cakes with vegetables, I wrote out the hotel tariff in three languages for Mr. Moulay of the Hotel de l’AmitiĂ©. In the morning, the truck came a bit early to pick me up, just as I was on the shitter, so I had to hurry to splash my butt with water, and grab my bags to throw them on the truck while it went off to pick up other passengers. Then, I ate a peaceful breakfast of bread and jam with Nescafe and three pourings of tea. The bread in Mauritania is delicious and seems to be one really good tradition the French left behind.

Aniticipating another disastrous ride, I had purchased a seat in the cab up front of the truck a couple of days in advance, so the ride was much better, albeit still quite bumpy and arduous.

We saw traditional cone-on-cylinder construction along the route. 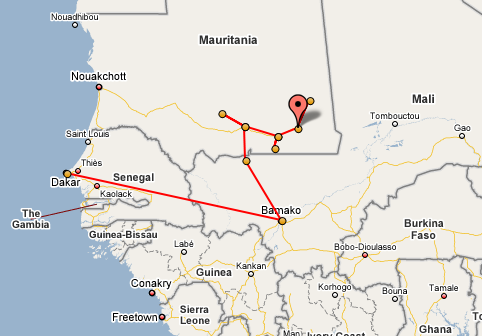 By the time I arrived in Nema, no trucks were leaving for Nara until the following day. By coincidence, a Peace Corps volunteer named Sarah walked by the truck just as I unloaded my bags onto the dusty street. She was the same person I’d seen just as I was departing Nema on a truck to Oualata, so she and I seem somehow to be in synchronicity (for more, see Sarah’s blog). She took me over to her new home which she was just fixing up with new tapis, a thin mat, and matelots, a mattress for lounging and sleeping. Since her place wasn’t completely set up yet, she brought me to Peace Corps volunteer Heather’s place to relax for the afternoon and spend the night. Heather and I chatted about some of the challenges she faces as a teacher in Nema. I also met a fellow named David. He and I discussed a variety of topics, such as health, writing, and his concerns about the Peace Corps. We visited the compound of a wealthy Mauritanian family where Sarah had been living and I discussed the symbolism of the Oualata house designs with a friendly Mauritanian gentleman. He mentioned that a cemetery near Oualata has grave markers of a similar design. I’ll have to do more research.

Then David took me to a compound of some oil exploration guys who were getting ready to leave Mauritania after around six months of work. They left me use their satellite Internet connection to post a brief entry to my blog, the first in ten days, and to read 2000 of the 3000 emails I had received during that time. They had sent a plane to search for a missing guy on a motorcycle, presumed lost or dead in the desert. Eventually, the guy texted from Timbuktu after worrying his motorcycle buddy sick.

Back at Heather’s place, I helped prepare a meal of eggs and hash browns with a cucumber salad dressed with a mix of mayo, pepper, honey, and limes. I contributed some mango juice and two melons to the meal. I read and critiqued one of David’s stories, then read aloud some of the first part of my novel to an appreciative audience of Sarah, Heather, and David, who provided some good feedback.

I slept well, took a bucket shower in the morning, and Heather walked me to the station to find a truck for Nara (4000 ougiya for a seat in the cab). The trucks actually go to a town called Adel Bagrou on the Mauritanian side of the border with Mali, then I’ll change to another vehicle to cross the border. It looks like I’m running at least a day behind my planned arrival in DjennĂ©, which may cut back on my visit to Dogon country.