The voodoo ritual for the adepts finishing their nine-month initiations in Ouidah was quite amazing. I hope my pictures come out. After getting hit up by various members of the chief’s family, and after chatting with some of the chief’s sons, as well as running into Bettina, a German filmmaker also staying at the Jardin Brasilien hotel, and another guy who has been filming for many years in Ouidah, and now living in the chief’s old house since the chief has moved into the official chief’s residence after the death of the prior chief.

Before the ritual started, another crowd came to the location for a funeral, chanting, and the pall bearers twirling the coffin rapidly around in the street. I tried to take some pictures, but some of the men told me not to do so.

After the funeral, a couple of women dressed in traditional costume ran through the ceremonial site blowing whistles. They came three times to indicate the beginning of the ritual. Then, the adepts and their teachers came from the chief’s residence into the ceremonial location. The ritual preparations had started with some men, probably tribal priests, preparing some items in the center of the location. They told me not to photograph them unless I paid them in addition to what I had already given to the chief and his family. So, I just waited until things really got going again before starting to take more pictures and, in response to some persistent nagging, gave a bit more cash to an elderly gentleman, another village chief in charge of some other part of the ritual.

As the dances began, drummers sat on one side of a large circle of spectators, providing rhythmic accompaniment and encouragement to the dancers.

At one point, the priests sacrificed a goat and a chicken, which cooked in two pots mounted over small fires at the center of the ritual circle. I didn’t stay late enough to see how the meat was distributed.

Some of the adepts dancing were quite young, say six years old. The crowd was joyful when the youngest girl danced energetically before the drums. The costumes worn by the adepts and teachers varied according to the orisha they initiated under and sometimes also according to the dance.

Another dance called the danse d’amour (love dance) involved a troupe of women dancing together and, as the music rose to a climax, the hugged, kissed, and gyrated their bodies in groups of two or three, simulating sexual contact to the general feigned shock and amusement of the crowd.

Gender-divergent males, perhaps mounted by female divinities, danced and blessed those in attendance.

A dance for the thunder divinity took place with dancers holding everything from ritual axes with iron blades to sticks and shouting as they rose and pointed these items to the center of their circular clump within the large circle demarcating the ritual boundary.

The ritual was incredible and fascinating, but as twilight fell, I started getting really hungry, and not for goat meat. Plus, I had a feeling one of the chief’s many sons was going to hit me up for more cash, so I gently slipped away. I ran into the same zemi driver who had given me the ride from the hotel to town. He offered to drop me back at the hotel.

On the way, we passed the tree of forgetfulness, said to be where the slaves were forced to march around counter-clockwise three times before proceeding down the slave trail to the beach where there is now a Gate of No Return monument to mark the passage of the huge number of slaves loaded onto small boats, then onto the large boats where they were packed tightly in extremely unsanitary conditions for the passage across the ocean.

I got back to the hotel and ordered dinner for 8pm, hoping that Jacques would be around at that time. Indeed he was, along with the French couple I had met earlier plus a fellow from Liechtenstein and his Malian girlfriend. We had a lot of fun chatting over dinner under the beautiful stars by the seashore. Isaac had caught the rays and Jacques proudly showed them off to me.

I went to sleep feeling good and slept well. The following morning Jacques and I traveled together to Cotonou, I to extend my transit visa and he to get some cash. We saw typical Benin gas stations along the way (picture below).

We parted when we arrived there. As I applied for my extended visa, I met a guy who split rather quickly and two female friends of his, Marie-Laetitia of Saint Cloud near Paris and Tine from Bremen, who was quite upset because the visa folks got the date of her visa extension wrong, meaning that she’d have to travel again back to Cotonou to pay for another visa extension if she wanted to leave the country with a valid visa on her planned date of departure. 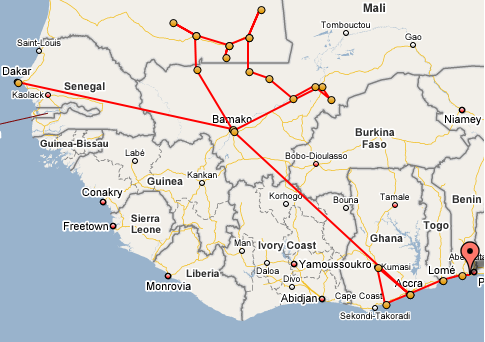 I decided to travel through the country while waiting for the visa, so I got on a shared taxi for Abomey after dragging my bags through the street and finally getting a taxi to the station at the Place de l’Etoile Rouge. 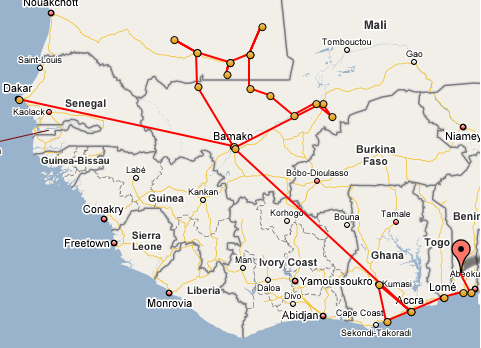 I also ended up walking my bags to a hotel when I arrived in Abomey because the most frequent transport available are the motorcycle taxis which I refuse to ride with all my heavy luggage. Since I was walking, I didn’t bother going all the way to the Motel Abomey, but got a room at the nearby Hotel Guévérney 4 instead. I arrived too late to tour Abomey the first day, so I drank to stay hydrated and rested and showered before ordering a large bottle of a fizzy apple drink I shared with the hotel staff and then eating dinner in the hotel. The room had only a fan, but I found that I could sleep comfortably by taking a shower just before getting into bed with the fan on. Hotel staff let me put my water and chocolate in their frig, although the chocolate ended up being a gift to them. I tried unsuccessfully to rent a bicycle for the next morning. And I couldn’t get breakfast before my cutoff time of 9am for heading out to see the sites of Abomey, thinking that I could perhaps travel on again that afternoon. That was not destined to happen.