The ride from Benin City to Ile-Ife was not as difficult as my prior overland travel in Nigeria. Evangelist Christians are omnipresent in most of the southern part of the country with Muslims predominating in the north and traditional animist and other religions hanging on to survival a bit behind the scenes. 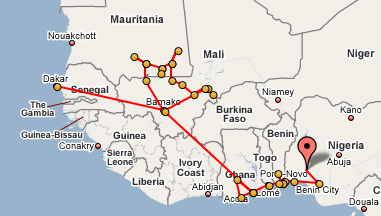 The Ife Museum in Ile-Ife had the following exhibits–
Musical instruments:

King and Queen, probably Ooni and wife, his left leg around her right leg, many beads in their crowns, beads on hands, chest, feet, rings on second toes, excavated by Frank Willet at Ita-Yemoo, dated 11-12th century CE, bronze, his face brown, her face green

Royal stool, terracotta, largest known in Africa from Iwinrin Grove, Ile-Ife, human figure standing on four-legged rectangular stool, behind him a pole of some king with a protrusion over the stool and between its feet

Olokun head, god(dess?) of the sea, giver of children, healer of abdominal disease, treat water with herbs for drinking

Brace scepters, one with gagged men, from Ita-Yemoo, Ife

Snakes and chameleons are sacred

Yoruba oba may own 40-50 crowns, most made of colored beads, collars over necklaces of fold, fly-whisk of horse hair

Offering pots at shrine or sacred grove, or burial place

Ase juju – usually prepared inside horn of ram or goat, invoked for cursing or healing, protruding pin inside the Ase – when removed and touches tongue, becomes a potent force of command, cursing, or healing

Stone carvings from Ore (One?) Grove

Potsherds Pavement – Luwoo – during reign of only female ooni of Ife-Luwoo, c. 1100 CE

Legend of sword that turns into obelisk

Husband of Moremi, heroine of Ife

Benin dynasty founded by Oranmiyan, married one of their daughters

Ile-Oduduwa – location where Oduduwa believe to have resided

Edan Ogboni – brass insignia worn around neck, male and female figures joined by chain, given to every member of Ogboni/Osugbo society among Yoruba

I almost didn’t get to see the Oba’s palace in Ile-Ife, but luckily some other tourists wanted to see it at the same time, so they gave us a little tour for a little price. It was there I learned about Moremi, “the heroine from premordial times” who, when captured as a slave by the Ugbo people eventually married the Ugbo ruler and became the queen to discover the secret of the Ugbo’s power so that she could bring it back to her people, the Yoruba, and defeat the Ugbo.

1 thought on “Ife Museum and Oba’s Palace in Ile-Ife, Nigeria”