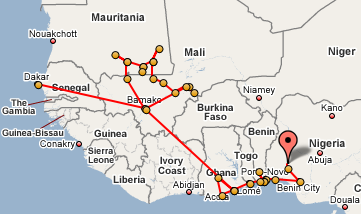 Oshogbo (or Osogbo), the “city of peace” never dominated by foreign rulers, has a river that runs through it which the residents worship as the Yoruba goddess Osun.

I saw this amazing sacred forest, the Osun Sacred Grove, reportedly the original settlement of the founders of Oshogbo starting more than 400 years ago. Now a long-term Oshogbo resident in her 90s, Austrian artist Suzanne Wenger (or Susanne Wenger?) helped over the years to restore the grove with fantastic Yoruba sculptures and was ordained as a priestess of the cult of the deity Obatala – the god of creation.

Toward the end of the visit at the main grove, I returned to the area by the Osun River and near the ceremonial dwelling, which was a kind of palace. The residents didn’t want me to take pictures unless I paid lots of baksheesh. I had already paid to take pictures when I paid the admission fee, so I decided to let the pictures of the palace go and take pictures of everything else instead. 😉

I found some more sculptures and shrines on my way back to the entrance.

At the entrance to the grove, I found out there is another whole area down the street that I hadn’t seen, so I broke out some more baksheesh to see the place.

After leaving the portion of the grove, I saw lots of sculptures alongside the access road on the way out.

I have located a place in Lagos to replace my lost laptop power adapter, so… Life is good! More after I get my laptop working again.